This essay first appeared on the Dissident Voice and CounterPunch webzines.

Was undeclared. Exactly where and when it began is debatable. Most would say there had been low-level conflict for millennia, but it only became a world war toward the end of the 20th century CE. Some choose the symbolic date when we ran that tanker, the Exxon Valdez, aground in Prince William Sound, because its cargo was the secret weapon that had brought the war into this new stage.

Our global forces were still divided into two antagonistic camps at that time, but both were at war with the greater enemy. The eastern camp had already killed the Aral Sea and poisoned 180,000 square kilometers of land with nuclear radiation (although this action was a Pyrrhic victory, resulting in more drastic consequences to us than the enemy). Shortly thereafter, we declared a truce of sorts between the factions, so we could make further gains in the great war, ostensibly without so much damage to ourselves. For the remainder of the last century, our forces were on the march everywhere, and the enemy fell back.

But in the early years of this century, some unseen fulcrum began to shift. Rather than the widely and randomly interspersed events we experienced in the relatively mild regime we grew up with, we saw destructive actions that escalated in their scope and frequency until they came to seem like calculated responses.

The waves of heat and cold. They caught us off-guard with their new intensity. Then the storms, to which we continued to give bland, suburban names: Mitch, Dennis, Katrina, Irene, Sandy, Iris, Maria. At first mostly a threat to the growing legions of the unprotected poor, they soon showed themselves a match for our largest cities. And beyond that: whole provinces, countries were paralyzed for days, weeks, months. And then the fires – early on they were far from where we lived and breathed, in the still-vast northern forests, but then they came closer, filling the skies of our cities apocalyptically with drifting ash and smoke, and finally, audaciously, striking at the sprawling cities themselves, taking thousands of buildings in a single attack.

Our initial casualties were so small – a few tens of thousands a year against all our billions. We published the tiny body counts for each incident, as if nothing else was of consequence. But overall, we took little notice, because we killed ourselves with friendly fire in vastly greater numbers. And against the enemy, we unleashed a holocaust. Total war. We took no prisoners. It was xenocide; we were willing to exterminate not just individuals but whole species to win our freedom. Thousands, then tens of thousands of species began to fall.

What we didn’t understand was that the enemy, who had seemed outmatched, capable only of rear guard actions, had retrenched and begun fighting a war of attrition: displacing millions, infiltrating town and countryside with hunger, sickness, despair. Leveling its aim at our infrastructure, our economy, our desire for comfort and ease. So many were uprooted and then discovered there was no refuge elsewhere. We were under siege and didn’t realize it.

Besides the weather it controlled, the enemy bred armies of the small: ticks, mosquitoes, cancers, viral plagues. Again, we had the sense that it was using our very advances in the wider war to undermine us. For example, we decimated the great tropical forests so we could install our farms and industries in them, only to find that the enemy had begun to burn the peat under the desiccated region surreptitiously to release more of the atmospheric carbon that we had just begun to understand was its greatest weapon. Carbon: an invisible and odorless waste product, something we simply breathed out, threw away. A stroke of the enemy’s blind genius.

There were some pacifists. They marched in the streets, shouted at buildings. They performed dramatic stunts at remote battle sites, recruited rich celebrities. Stop the War! they cried, with colorful banners unfurled. Many of their actions were heroic. But they were relatively easy to marginalize. If they were well-to-do, our leaders made sure they were seen as hypocrites, trying to deny the poor their hope. If they were poor, they killed them, imprisoned them, or simply ignored them. They were expendable.

In the end, we discovered our leaders had betrayed us. Our titans of industry betrayed us. Too late we realized: they were actually on the side of the enemy; they were provoking its ever-stronger attacks on our homes, our food, our pleasures. They sacrificed us to enrich themselves. And, in time-honored fashion, the enemy used our own strength against us…

The thing that struck me most about living for years in a country at war was how much normalcy there was. Every day the streets of the capital were jammed with traffic, the stores crowded with shoppers. We went to the mall, to birthday parties, the beach. Occasionally a car bomb would go off. A light post would be blown up. There were bored soldiers with assault rifles at the entrances to the banks, the airport and the bus stations. The television and newspapers were heavily censored. They ran the same non-sequitur crime stories every day. They said nothing about the war.

In the distant countryside, bombers screamed overhead, dropping payloads that destroyed villages, and helicopter gunships prowled, seeking out columns of fighters moving through the bush to mow them down. But when I visited the far-flung villages in the later years of the war, I never saw and scarcely heard any fighting. The doughty buses ran regularly over the rough roads and were always full of passengers, although sometimes they had to stop at checkpoints and be searched. The tropical sun shone, the farmers left for their fields before dawn, the teachers held classes in the tin-roofed sheds. It all just went on. Somewhere out of sight, thousands of troops were on the march; skirmishes were being fought daily, people were killing and being killed. A tiny place, that country at war, and yet most of the time the war was far away unless you were actually fighting in it.

So now, understanding at last that we are all at war, the final war, the forever war between our species and our vast complex single enemy, the planetary ecosystem that engendered us, I know how I will live, girded by the invisible armor of the middle class everywhere, but especially in the rich world. I know that I can go down the street to the coffee shop every day, and one day the sky will be thick with the smoke of wildfires incinerating a town to the north, and everybody will be wearing surgical masks, and the sun will be red as molten steel in the sky’s furnace, but in a few days the smoke will dissipate and I’ll go back to the coffee shop and joke with the waitress and get my coffee. “It’s a good day to be alive,” she’ll say, and I’ll agree.

And next winter, a mammoth storm will wreck the highway, and a few dozen unwary cars will slide into the abyss, but we will take a detour, or change our vacation plans. The crews will show up eventually, although the road will be blocked for months, and maybe one lane buried under a massive rock slide will never open again. But the traffic will keep moving regardless. We’ll get there. We’ll get to a place where the forest hasn’t burned yet, or floods destroyed the dam that held back the lake, or the hotel closed because one or the other of those things happened.

And then there will be the attack from the sea – the Dungeness crab will be poisoned with a new bacterium, or its numbers will crash for a year, and then another, or this will happen to the salmon or bass, till many of the fish markets close, but we will go on finding good things to eat; intrepid chefs in the downtown bistros will do creative things with jellyfish and squid. Thousands of seals dead of starvation will litter our beaches one year, pods of whales another, but we will step over them, in mild dismay, and wait for the authorities to clear them away. And then we’ll go back to the beach, unless another storm comes that washes it away for good. And then we’ll find another beach that hasn’t been washed away yet.

The heat waves will hit, and the pavement will melt so the planes can’t fly for a day or two, and we will grumble about the delay and wait in whatever air conditioned space we can find until the temperature drops again. We’ll still find a way to visit our distant families or get our business done. It will just be a little more time-consuming, unpleasant, and expensive each time.

The helicopters will prowl overhead more often; the sound of sirens will be a more constant backdrop. The news will be a garish pageant of non-sequitur crime stories. Most will say nothing about the war.

On the quiet days when no battle rages anywhere near us, we will stand on our doorsteps for a moment and breathe the soft air that reminds us of peacetime. As you do when you live with terminal illness, we’ll have a sudden sharp memory of what it was like before, when we were healthy, or thought we were. Our happy past will seem so vivid and real, for an instant. And then we’ll push the memory aside, and with it the hope that health or peace will return one day. We’ll just get on with it, burying our sorrow and regret deep in the urgent trivia of the day-to-day, for whatever time we have left. 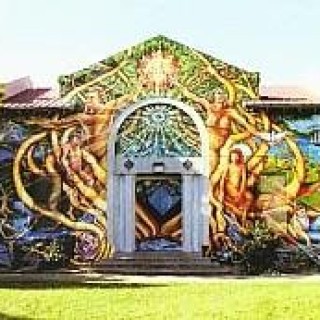 Christy Rodgers lives in San Francisco, where all that is solid melts into air. She has published essays, reviews, articles and tales in CounterPunch, Dissident Voice, Truthout, Alternet, the Dark Mountain Project, and (too) many now-defunct small press publications. Basically she's nobody, who are you? Are you nobody too?